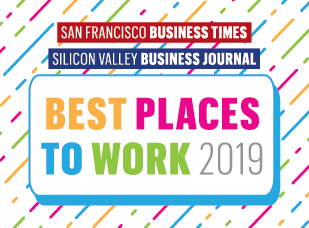 ENGEO has been recognized as a winner of the 2019 Bay Area Best Places to Work, an awards program presented by the San Francisco Business Times and the Silicon Valley Business Journal. ENGEO placed 18th. ENGEO has participated in the award for the past 15 years and notably ranked as the number one Best Place to Work in 2006 and 2007.

Select employers from the Bay Area were named winners of the awards program, held on April 18, 2019. These winning organizations were honored for having created exceptional workplaces that their employees value highly.

Award applicants were evaluated and ranked across five categories according to the number of Bay Area employees. The ranking found companies in the region whose employees rate them as the highest on such values as fun, collaborative culture, solid compensation and benefits offerings, and other amenities, as well as management practices. The rankings were unveiled on April 18, 2019, at the awards program.

“We are in the hot bed of competitive employment. Many of the companies in the Bay Area are international and others are small start-ups, all competing for top talent. We must go above and beyond not only to attract but to retain the best and brightest.”

Best Places to Work is an innovative publication and awards program produced by the San Francisco Business Times and the Silicon Valley Business Journal. The rankings were determined by surveys that went directly to employees who answered a series of questions. The survey was administered online by the employers and through a service provided by Quantum Workplace. The rankings are numeric based on Quantum’s scoring process. By ranking companies and sharing best practices, it facilitates idea sharing and helps other companies learn from the best.